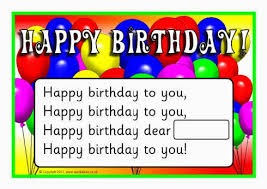 How Was “Happy Birthday” Still Protected as a Copyright?

November 8, 2015 / David / Comments Off on How Was “Happy Birthday” Still Protected as a Copyright?

By now it is likely you have seen the news story.  On Tuesday, September 22, 2015, Judge George H. King, in the United States District Court for the Central District of California, ruled that Warner/Chappell, the publishing arm of Warner Music, did not have the right to enforce its claims in the copyright for the ubiquitous lyrics to the song “Happy Birthday.”  The legal implications are that the song lyrics may be in the public domain and free to use by all.

The question many of you likely also have is “how was ‘Happy Birthday’ still subject to a copyright after all these years?”  It can be somewhat complicated.

A quick primer on music copyrights.  Most songs you hear actually have multiple copyrights within them.  First there is the sheet music for the melody.  This is independently copyrighted.  There is also the lyrical content.  This can be subject to a separate copyright.  There is also a separate copyright for the actual sound recording.  Each of these copyrights can have different authors and be owned by different individuals or entities.  Typically, under current United States copyright law (based on the 1976 Copyright Act), a copyright exists and enforceable for the life of the author of the work plus an additional 70 years after the author’s death (17 U.S.C. § 302).  For works created prior to the new Copyright Act, however, it can be a little bit murky and are governed by a separate provision in the Act (17 U.S.C. § 304).  “Happy Birthday” is one of the latter kinds of copyrighted works, which makes this case interesting.  It also requires putting together a few puzzle pieces to determine who actually wrote the actual song and its lyrics.

In 1935, the Clayton F. Summy Co. filed a copyright in the rights to specific piano arrangements for “Happy Birthday.”  A successor entity, Birch Tree Group, acquired this copyright thereafter.  In 1988, Warner/Chappell bought Birch Tree Group and began enforcing the copyright in “Happy Birthday,” including third party uses of lyrics and melodies associated with the song.  Warner had been charging royalties for all uses of the song in all contexts, including movies and television.  Unbeknownst to many, this was a substantially profitable venture for Warner, bringing in excess of $2 million per year in royalty payments.

Adding to the bizarre nature of the dispute, the song pre-dates this 1935 copyright filing.  The song “Happy Birthday” actually appears to have originated from a song melody written in 1893 by a schoolteacher for her kindergarten class entitled “Good Morning to All.”  This song was published in a book and the copyright assigned to the Clayton F. Summy Co. in exchange for a percent of sales. This latter song has been acknowledged to be in the public domain for decades, but Warner has consistently challenged that the lyrics were still subject to its copyright filing from 1935.  Judge King, however, ruled that Warner never properly acquired the rights to “Happy Birthday to You” because there was no evidence that the schoolteacher actually wrote the lyrics we associate today with “Happy Birthday.”  This leaves the possibility that someone else still owns the copyright in the lyrics to “Happy Birthday” and that it is not fully within the public domain.  Additionally, Warner/Chappell could appeal the ruling and seek review by the Ninth Circuit Court of Appeals.

The song is over 120 years old now, however.  The authors and songwriters are long since gone and deciphering who wrote the lyrics apart from the melody may be impossible to verify.

In the meantime, I am sure there are a lot of creative people who are happy they will not have to expend resources trying to work around characters singing “Happy Birthday” lyrics in movies, television and other pop culture arenas.  At the very least they can save a few thousand in royalty payments to Warner.  For now.

What if Intellectual Property Rights Were Enforced in the World of “The Princess Bride”?