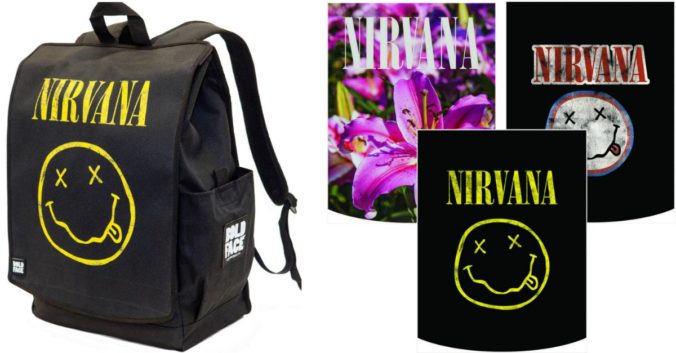 On Friday, December 28, 2018, Nirvana, LLC[1] sued Marc Jacobs International, Saks Fifth Avenue, and Nieman Marcus for copyright infringement, trademark infringement, unfair competition, and false designation of origin under the Lanham Act.[2] The crux of the dispute is over a new line of clothing being introduced by Marc Jacobs dubbed “Bootleg Redux Grunge” that he intends to sell to the public at Saks Fifth Avenue and Nieman Marcus stores. In short, these “grunge” clothes are being marketed to a high-end socioeconomic demographic that is antithetical to everything Kurt Cobain and Nirvana stood for. Because of course they are.

The real dispute is over the appropriation of the iconic Nirvana “smiley face” logo and what Nirvana contends is a derivative, non-transformative use by Marc Jacobs. I will not go too in-depth on the specific claims other than to say: yes, this is an infringement and Marc Jacobs is most certainly trying to associate this clothing line with famous Nirvana trademarks and copyrighted works. It is shameless. Everyone involved should be embarrassed. Yes, including Nirvana’s own lawyers – for reasons I will address.

Of course, I am biased. Nirvana is my favorite musical group of all-time and hearing “Smells Like Teen Spirit” for the first time when I was 14 years old was nothing short of a life-changing experience. Like millions of others, I also own one of the famous “smiley face” t-shirts and other merchandise bearing that image. This is a blog about trademark and copyright law, meanwhile – so let us break down the claims made against Marc Jacobs.

This lawsuit is not about Nirvana’s music. There are no claims about the defendants stealing or infringing Nirvana songs or sound recordings. This is about merchandising and imagery. This is about a particular logo that was used by Nirvana and which has become ubiquitous with the band and its image. According to the lawsuit, Nirvana first created, used, and licensed the “smiley face” logo in 1992. Which is consistent with my memory as that is about the time I first bought that t-shirt. Apparently, the logo is being or has been used on “t-shirts, shirts, hats, hoodies, bags, backpacks, glasses, wallets, and other items of merchandise, many of which have sold extensively for decades, both with and without use of the “Nirvana” mark adjacent to the Smiley Face design and logo.”[3]

Nirvana filed an application to register the copyright for the smiley face logo and it was accordingly registered on or about March 11, 1993.[4] Copyrights created by entities such as Nirvana LLC and its predecessor entity are entitled to protection for 95 years from the date of creation.[5] There can be no dispute that the smiley face copyright has not yet reached the public domain, even if Kurt Cobain died nearly 25 years ago.

Copyright exists the moment a work has been fixed in a tangible medium of expression. This includes visual works such as the “smiley face” logo. This is true, even though the logo is used in association with a musical group for commercial purposes. The underlying commercial nature of the work does not affect the existence of a copyright in the abstract.

The logo itself has also been used to identify Nirvana as the source of the goods and merchandise and memorabilia that use this logo. That nature of use makes the logo subject to trademark rights as well, even while it is also protected by copyright law. Most logos have dual trademark and copyright protections. According to the USPTO, “a trademark is a word, phrase, symbol, and/or design that identifies and distinguishes the source of the goods of one party from those of others.”[6] That is all it takes for something to operate as a trademark, so long as the mark is actually used in commerce by the trademark holder.

As somewhat of a byproduct of trademark and copyright protections, the smiley face logo has become intrinsically affiliated with Nirvana, the band members, its overall image, and the band’s role in pop culture. Almost certainly – this is why Marc Jacobs created a design that is substantially similar to the smiley face logo for his “grunge redux” clothing line. Of course he would want to tap into the 90s throwback nostalgia culture that the smiley face logo represents.

Why this is embarrassing for everyone involved

Yes, Marc Jacobs should be embarrassed. He knew what he was doing. This is not accidental. This is the actual logo he uses on the “bootleg grunge redux” line:

All he did was replace the Nirvana text with “Heaven” using the exact same font.  Where the eyes were previously represented by an X, there are now an M and a J for Marc Jacobs’ initials. No one involved is even trying to hide the intended association with the original image. This is what copyright law calls a “derivative work.” Heavy emphasis on derivative as the laziness involved by the defendants is substantial. Nirvana, as the copyright author and owner, has the sole and exclusive right to any and all “derivative works” that make use of the smiley face logo.[7] Marc Jacobs does not have authorization to use the logo for a separate work that has nothing to do with the band, its music, or its intended image. This is copyright infringement.

The standard for proving copyright infringement is relatively straightforward. A plaintiff must demonstrate ownership of a valid copyright and the wrongful copying of the copyrighted work by the defendant.[8] Nirvana has a registration for the visual work. There is no evidence that anyone else is the author of the work. To show infringement or wrongful copying, a plaintiff must show that the defendant had access to the copyrighted work and that the accused work is substantially similar to the protected elements of the copyrighted work.[9] That’s it. That is all that is required to demonstrate infringement. Here, while the Marc Jacobs logo is not identical to the smiley face logo, this is not required nor is it the standard. It must merely be substantially similar. And, typically, the more “access” one has to the work, the less of a showing of substantial similarity is needed. It is often a sliding scale.

Similarly, for trademark infringement, Nirvana only needs to demonstrate that there is a valid trademark that is protectable and enforceable. And that the defendant’s use of the mark is likely to cause confusion among the relevant customers.[10] This would include a false impression of sponsorship or affiliation with the trademark and the trademark’s owners.[11] Notably, here, you do not need a trademark registration to have trademark rights. I have written about this before. Registration is encouraged, but not necessary.

Why else would Marc Jacobs use this specific logo for his clothing line unless he intended to associate the mental image of “Nirvana” in the minds of his customers? The nature of his use is a classic false association and false sponsorship that demonstrates trademark infringement. The initial impression a customer will have is that the t-shirt looks like the Nirvana smiley face. It does not look like a Marc Jacobs product in the abstract. This is called “passing off” or “palming off” in the trademark world. Marc Jacobs is trying to exploit the goodwill generated by Nirvana’s smiley face logo for his own commercial gain. This is unlawful use.

Yes, This is Embarrassing

Presumably, Marc Jacobs, Saks Fifth Avenue, and Nieman Marcus all have lawyers. They probably have entire in-house legal teams dedicated to specifically issues like copyright and trademark clearances. How this ever got through these departments without a series of red flags is problematic and baffling. This is not even a close call for infringement of both trademark and copyright law. It would not even make for an interesting law school exam hypothetical.

Moreover, trying to re-appropriate grunge culture for customers of Saks and Nieman Marcus is appalling. Nirvana was anti-commercialization of most everything. Especially high-end clothing lines and fashion. Kurt Cobain routinely wore t-shirts mocking people who might be buying these Marc Jacobs products.[12] Seeing the smiley face logo marketed for opulent lifestyles in shopping malls would mortify Kurt. Even 25 years later. This is all cringe-worthy.

Nirvana’s lawyers are not blameless here either. Reading through the Complaint, it is almost as if the lawyers and associates drafting the legal documents do not understand anything about their client or the cultural impressions made by Nirvana and Kurt Cobain. Among the errors in the actual text of the document:

Most importantly, however, is the fact that Nirvana hired a high-profile law firm to oversee its intellectual property rights – and this high-profile law firm failed to register the Smiley Face logo trademark. Yes, this lawsuit is asserting claims for trademark infringement – but only based on Nirvana’s common law rights in the mark, as there is no registration.[13] Only the copyright is registered as of today. Register your trademarks, everyone. Especially if you are famous.

By not having a registration, Nirvana loses out on certain statutory damages and presumptions of validity and enforceability. Not to mention the recovery of attorneys’ fees for a successful trademark infringement claim. It is not an insurmountable obstacle, but for the $1,000 or so it would have cost to acquire a registration it will cost substantially more in out of pocket attorneys’ fees to prove up now. Unfathomable.

In the end, I expect this to be settled because the defenses to Marc Jacobs and the other defendants are limited. Maybe there will be a retroactive license granted with a higher royalty rate. Maybe they just remove the use of the smiley face logo altogether. It should never have come to this. This is a classic case of trademark infringement and copyright infringement.

[1] Nirvana LLC is a Washington corporate entity formed by the remaining members of Nirvana, along with the estate of Kurt Cobain. So, yes, Courtney Love is involved here.

[11] The “false association” and “false designation of origin” claims are the basis for Nirvana’s Lanham Act-specific causes of action that may go beyond mere trademark rights.

[12] Courtney Love, however, is a different story and she probably would have appreciated this – she appreciates high-end fashion. But she wants to get paid, too. Which is her right.