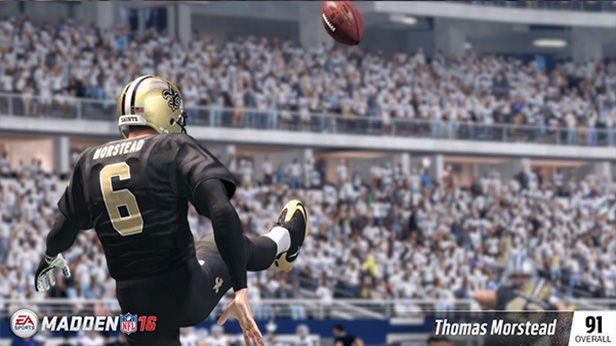 The Right of Publicity

An individual’s “right of publicity” is a relatively new legal doctrine. The legal right is often for the benefit of celebrities and public figures. American culture embraces celebrities and famous people. Significant bodies of law have been created to govern how the media is able to comment, critique, report, and commercialize celebrity culture. The tension that often rises between legitimate “reporting” of celebrity news and the potential unfair exploitation thereof has recently been addressed in the Bollea v. Gawker Media case – which you may know better as the Hulk Hogan sex tape dispute. That case addressed one aspect of the First Amendment, specifically whether the misadventures of famous people can be legally considered news.

Celebrities are also often presented to the public as spokespeople. They promote products. They appear in advertisements. They provide sponsorship. This often incentivizes the use of celebrity images in the context of “commercial speech” even where the celebrity in question did not affirmatively endorse or sponsor or approve of a particular message or advertisement. The right of publicity in these instances trumps an advertiser’s claims to any unauthorized use of a celebrity if the message falsely conveys such sponsorship to the consuming public.[3]

There is yet another area where the right of publicity is a factor. This brings us to the Madden NFL dispute. Athletes are a form of celebrity and they routinely provide entertainment to sports fans. The more famous athletes may even be able to promote individual messages beyond the playing field. This fame encourages public discourse, not only about their on field performance but also their off field activities and statements. In part because of our celebrity culture, the First Amendment provides a heightened standard for protection when the public comments on famous people, including athletes. This First Amendment protection, however, is not absolute. Where an individual athlete’s “economic value” is exploited or appropriated by others without authorization, the First Amendment is not a defense to these acts.[4]

But how does this apply to video games?

Video games are speech that is protected by the First Amendment. The Supreme Court has held that they “communicate ideas – and even social messages.”[5] Meanwhile, it is now known that athletes are entitled to their rights of publicity for their individual images and likeness. Not surprisingly, the legal system has been asked to clarify the boundaries for where the First Amendment may encroach on publicity rights, and vice versa. When is it legal to use an athlete’s name, image, likeness and/or factual characteristics?

California courts have set forth a balancing test known as the “transformative use” test based on whether the work in question adds significant creative elements so as to be transformed into something more than a mere celebrity likeness or imitation.[6] 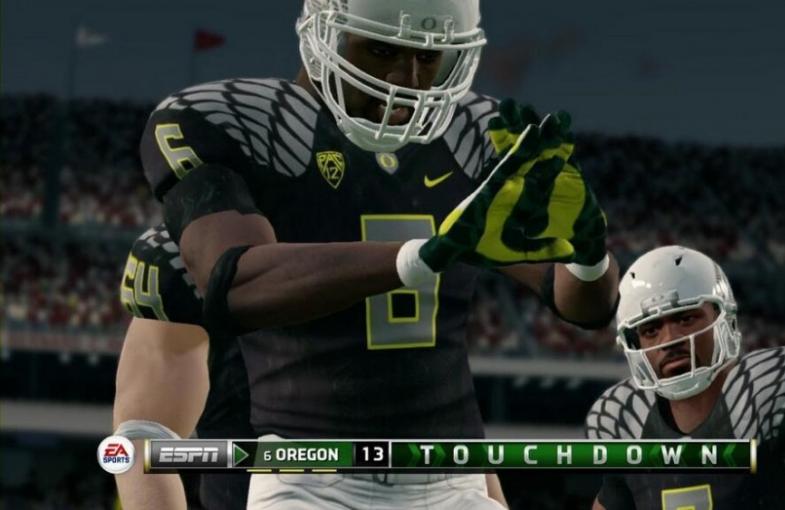 The Madden NFL dispute was not the first time EA Sports challenged the rights of publicity of athletes in video games. Nor is it the first time EA Sports has raised a First Amendment defense. A companion video game series to Madden NFL known as NCAA Football used the images, characteristics and details of amateur college athletes as part of its depiction of realistic college football games. Many of these athletes depicted filed a class-action lawsuit against EA Sports claiming this right of publicity. In that case, Keller v. Elec. Arts Inc., the Ninth Circuit held in 2013 that the right of publicity was violated and that the First Amendment was not an appropriate defense.[7]

In Keller, EA Sports tried for the first time to rely on this “transformative use” balancing test to overcome any allegations of the rights of publicity being violated. The Keller court outright rejected this approach. Keller held as a matter of law that the use of college athlete’s likenesses was not a transformative use. In doing so, the court cited to a case involving the musical act No Doubt, who were previously featured as “literal recreations” in a video game. The Ninth Circuit found in that case that “the expressive elements of the game remain manifestly subordinated to the overall goal of creating a conventional portrait of No Doubt so as to commercially exploit its fame.”[8] The Keller court relied heavily on this case in its analysis.

Following the No Doubt precedent, the Keller court determined that since “NCAA Football realistically portrays college football players in the context of college football games” there is no transformative use.[9] The athletes were represented in the video game in a “realistic” manner and not as “fanciful, creative characters.”[10] By replicating real-world physical characteristics within the video game construct and by seeking to make the game “realistic,” the Keller court wholly denied any claims that the use of athlete’s likenesses was transformative.

EA Sports also submitted alternative defenses based on the Rogers v. Grimaldi case from the Second Circuit that applied a separate balancing test for comparing First Amendment rights with Lanham Act common law rights of publicity.[11] Rogers was applied to artistic or expressive works, which would theoretically include video games. The Keller court, however, rejected this end around on the right of publicity. Specifically, the Keller court noted that the Rogers test, and any related Lanham Act based defense, is designed to protect the public from misleading statements or false impressions.[12] The court highlighted the distinctions in Rogers for artistic works as compared to ordinary commercial products and stated that “in general the [Lanham] Act should be construed to apply to artistic works only where the public interest in avoiding consumer confusion outweighs the public interest in free expression.”[13] In the context of video games and publicity rights, the Keller court determined that the Rogers test was inapplicable because it sought to protect consumers. In contrast, the right of publicity protects the individual celebrity, not the consumer.[14] Accordingly, the college athletes’ rights of publicity were held to be violated through EA Sports’ use of their images and information in the video game.

Not long after the Keller decision, EA Sports announced it would discontinue the NCAA Football video game series. There are rumors it may return in 2017. As of today, the series remains on the virtual bench. 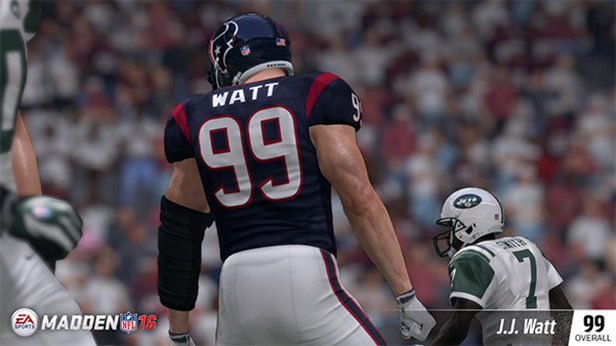 Undeterred by the Keller decision, EA Sports continued to fight claims of publicity rights in Davis when former NFL players objected to their inclusion in the ubiquitous Madden NFL series.

Madden NFL is practically the same as the NCAA Football counterpart as a game playing experience. The primary differences being that the names and information for existing and current NFL players were licensed through the NFL Players Association. From 2001 to 2009, however, Madden NFL also included “historic teams” and rosters, which used the likenesses of former players from these historic teams. And thus a pattern emerges. These 6,000 retired players are no longer members of the NFLPA and sought to enforce their rights under California’s right of publicity laws.[15]

EA Sports raised the same defenses as it did in the Keller matter. It claimed that the allegations are barred by the “transformative use” exception. It claimed that Lanham Act / Rodgers balancing test should apply. EA Sports also asserted that the use of athletes’ images was of “incidental use” and would therefore not be subject to claims for publicity rights. If “insanity” is doing the same thing over and over and expecting different results, you can imagine what the Ninth Circuit considered EA Sports’ argument to be on that spectrum.

The Davis court stated that “Madden NFL is indistinguishable in this regard from NCAA Football… although [it] contains some factual data about current and former NFL teams and players, it is ‘a game, not a reference source’ or a ‘publication of facts’ about professional football.”[16] Furthermore, “[n]either the individual players’ likenesses nor the graphics and other background content are transformed more in Madden NFL than they were in NCAA Football.”[17] The court even noted that EA Sports did not even attempt to distinguish the two video games.

EA Sports did try to claim that an individual athlete’s right of publicity is of “de minimis commercial value” by stating that because there are thousands of players featured, any one particular player’s likeness cannot be material.[18] The Court summarily rejected that attempt. The Davis court took the extra step of stating that “EA goes to substantial lengths to incorporate accurate likenesses of current and former players, including paying millions of dollars to license the likenesses of current players.”[19] The Ninth Circuit took EA Sports to task for making the game a realistic simulation of a real-life event and then trying to deny the similarities.

SCOTUS punts on the Right of Publicity issue

This “realistic” argument ended up being the crux of EA Sports’ appeal to the Supreme Court.

The Ninth Circuit’s determination that the video game is “too realistic” was used by the Defendant to paint EA Sports as a victim of its own success. EA Sports objected that this will chill expression and lessen the desire to make realistic-looking improvements to virtual video game environments. These arguments fell on deaf ears.

Now that the Supreme Court has decided not to hear the appeal, however, the Keller and Davis decisions remain the law of the land. For now. EA Sports’ “if it’s in the game… it’s in the game” advertising slogan appears to have backfired in the court of law.